Our Condolences to the Family of the Late Senator Stowell 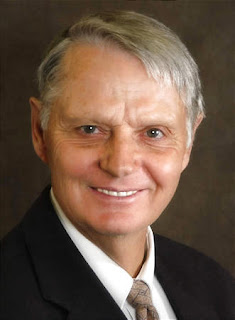 PAROWAN  – Utah State Senator Dennis Stowell passed away at his home on Sunday morning due to complications from his battle with cancer. Senator Stowell represented District 28, which includes Garfield, Kane, Iron, Beaver, Millard, and part of Washington County.

Funeral services will be held Friday, April 22nd at the Parowan 3rd and 4th Ward Chapel (90 South Main Street).  A viewing will be held the evening of Thursday, April 21st.  Exact detail will be available in the next few days.

Dennis Stowell’s elected public service spanned nearly 25 years.  Prior to his 2006 election as state senator, he served as Mayor of Parowan and as an Iron County Commissioner.  He held an advanced degree in chemical engineering from Brigham Young University and his professional work included engineering, inventing, ranching, and farming.

President of the Utah Senate Michael Waddoups described Stowell as well-liked, highly respected and one who served many important leadership roles during his time in the legislature.

“Dennis Stowell was remarkably intelligent and personable,” said Waddoups.  “He was absolutely dedicated to water rights, the rural economy and lifestyle, and preserving the agricultural roots of our state.  As vice chair of the appropriations committee, he worked tirelessly to balance the budget and would not stop until the task was complete.  We will miss Dennis. We will miss his good cheer, his analytical capabilities and his strong convictions.  Our thoughts and prayers are with Marilee and the family.”

It is anticipated that the Utah State Republican Party will, in the near future, convene a meeting of all state delegates who live within the boundaries of Senate District 28 to select a new state senator.

Comments can be found at
http://www.senatesite.com/home/dennisstowell/#comment-21104